If you get 10 bird hunters together and asked them how decoys do you need, you will get 10 different answers. Sadly, there is no magic number that will suck in more birds to a decoy spread. The answers will usually be based upon opinion and we all know that opinions are like buttholes, we all have one (and they usually stink). When asking the numbers question, I find it crucial to ask the right person. I would avoid asking an ‘old timer’ who hasn’t hunted in years, the answers he gives will be out of date and inadequate.

For example, my Uncle Ken used to tell me that all I needed was a dozen or two decoys and that’s it. Now Ken hunted on his own land or his neighbor’s land and Ken would watch the fields like a hawk, if a goose flew over he would watch the flight paths and the winds. He would clean up pass-shooting (future article) in a morning or evening because he had scouted those birds well and knew the land like the back of his hand. In those days Ken only needed a few decoys and the way he hunted worked for him. That was in the 60’s thru to the early 90’s. He would shoot lots of big honkers and an occasional snow goose. His advice was excellent for those years, but things have changed. Now at his farm big honkers usually are gone by early September and thousands of snow geese, specklebellies, cranes, and ducks have been migrating through Sept-Oct. Times change, equipment changes, migrations change, and so must our tactics. 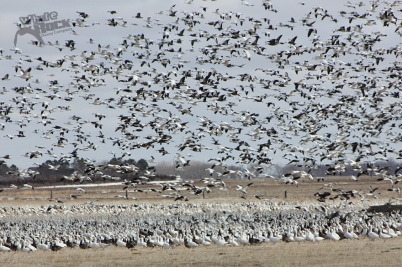 I get asked by people of what type or number of decoys should they buy. Let’s say my good old buddy Steve is asking me questions on decoys. I know it’s rude to answer a question with a question, I usually ask two questions.

#1 – Do you plan on hunting with anyone else who has decoys? I ask this to Steve to find out if Steve’s hunting partners have any equipment in which to build a spread from. Perhaps they have a few duck floaters or goose shells. It would be wise for Steve to compliment his hunting party’s existing gear. Why buy goose decoys if they already have enough of them, you may find out that they want/need a few motion duck decoys. If Steve has a party that he is planning on hunting with, I encourage them to talk with them before he talks with me.

#2 – What kind of hunting do you plan on doing Steve? I can follow this up with, “Which region do you plan on hunting?” We have different decoys for different species and for different environments. Is good old Steve hunting over water or on a field? After I hear what his plans are then I can give an informed opinion.

We always start off small. When I first started to buy gear, I did not have anyone to take me out that had any decoys. I had some fields near Carstairs lined up and some fields/swamp up by Athabasca. I had a layout blind and 4 large magnum Canada goose shells. I headed down to Basspro Shops and bought some decoys on sale during their Fall Classic Sale. I bought 3 dozen Canada goose shells and a dozen mallard ducks and a dozen green wing teal floater decoys. Now armed with decoys I went off to kill my limit. I never thought of how to anchor the floater decoys and I soon realized that Green-wing teal were long gone by the time our Alberta hunting season opened up. I had enough success to keep me interested and enough failure to keep me wanting more. Next season I  bought 4 more Magnum shells and 2 dozen more Canada goose shells from Basspro. When setup properly I found that birds were decoying and I was killing birds. I was able to limit on Canada geese one morning and that got me fired up. I picked up some full-body decoys and was set. As new people like Warren and Lyle started hunting, they purchased gear and now we have a great Canada spread with a large Speck/Snow goose arsenal. We have hunted mostly fields but this year we are thinking that we are wanting to hunt more water. We are looking for a few dozen more floater ducks and floater goose decoys. Only through experience have we been figuring out how to use the various types of decoys that our party owns.

Start off with a few dozen cheaper Canada decoys. The best mallard/pintail decoy in a field is a Canada goose decoy. Those ducks will hit a Canada goose spread harder than a fat guy at an All-You-Can-Eat Chinese Buffet. Snow geese and Specks will decoy to Canadas as well. If you are after Canadas and ducks, get some Canada decoys, there’s my two cents worth.

The most important thing you can do is GO HUNTING. Pass shoot birds coming off a slough, get a few dozen decoys and set them up and a field where you have seen birds feeding. You only learn by doing and failure is the best teacher. One does not kill many birds with your butt on the couch. Get out there. Start out small and build every year! After a few years, you will have a decent amount of gear! Watch Kijiji and Basspro/Cabelas. One can scoop up some great deals!