I would like to thank Lyle S. for making a little drive in an area where we do not usually hunt. He went out of his way to scout a group of leading edge birds on a lake that we heard was holding some snow geese. He saw where they went and we decided that we would make a drive and see if we could get some landowner permission.

We drove to a nearby Hutterite colony and met the head-hog. We talked with him and a few more of the lads, Lyle passed out some of his superb snow goose jerky. They liked that. The gentlemen took a real interest in the fact that there is a snow goose hunt in the spring and we showed them the contents of the trailer showing them the rotary machines, blinds, e-caller, and decoys. I was able to get a direct phone number for future hunting opportunities as well. Always best to meet people face to face I say.

We did an after noon set up on a wheat field just south of the roosting lake, in the flight line where Lyle saw them go the night before. One of the gentlemen from the colony saw the birds on the adjacent field that morning. We knew we were in the right area. We set up fast and as we wrapped up the setting up, we saw a truck driving on the field. Uh oh, we made a mistake, were we on the wrong field? Nope, it was  our new friend who wanted to see our field set up. He said that he saw our rotaries from a mile away. Perfect. Thank your Matt P. for making them!

We chilled out and waited and the we started to see birds moving around 6pm. We were buzzed by dozens and possibly hundred of pintails in majestic form. We do not see Pintails with their mating colours in our fall season. Then we saw the snow geese high in the sky moving in. Then the birds lifted off the pond and they were moving to us.

Leading edge snows are tough since they are so smart. These birds were out of the Pacific migration so the saving grace is that they are not shot at a lot. We had a sizeable bunch work us and get into range. It appeared that some birds behind them were going to possibly get lower so we waited. The first group flared at something and took the whole mob with them. We remembered that we were hunting leading edge birds, take what you can get because they are not ignorant birds. Ten minutes later another group came in and we took four out the bunch. 15 minutes later another batch hit us and we took another 4. 8 total for the evening. We had birds work and drop on us from the Statosphere and flare before in shooting range. We had fun and learned a lot. 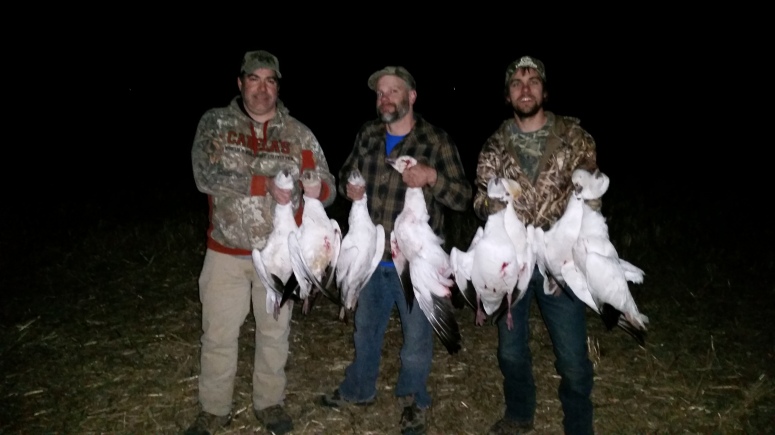 I tried out the new gun, had a minor hiccup that was easily solved and not to be repeated again. The new blind worked well, will modify a few things to make it better. We are going to try new ideas of locations of the rotary machines for the future since we have never used 3 in the field before. Overall we took lovely birds and saw lots, it was a great evening, I cant wait till more arrive.

One thought on “Start of the Spring Season”