Just like last season, we were receiving a blast of warm air making for well above average temperatures across Alberta. The temperature was forecast for 20 degrees (69 F) and it looked like it was going to be windy. I made a call to a friend down south and there were snow geese working their fields. These birds from the Pacific migration are not hunted as much as their central migration cousins, so this was looking like a great hunt to end our waterfowl season off. Lyle, RJ and myself decided to set up almost all the decoys for this last day.

When we arrived at the field 1 1/2 hours before shoot time, we had stiff 20 km SW breeze. I love setting the socks up in these winds since it makes for a super fast setup. We had the decoys, e-caller, and rotary machines setup well ahead of schedule. I was able to move the truck and get to the task of stubbling up the layout blinds. We were one a low cut wheat field and we had found a nice patch of higher cut wheat to hide our profiles. We got done this task well ahead of schedule and waited for some early birds to hit. Then the wind picked up.

The morning was spent waiting for birds and watching the decoy spread blow all over with gusts of 45+ kph winds. We had a small group of snows come in which allowed us to take 2 nice adult birds. We watched thousands of birds circle the roost and land. It appeared that the snow geese did not want to fly in this wind. We decided to have lunch and try our luck in the evening. The forecast called for the wind to die down later in the afternoon. I drove to see if the birds were still sitting on the roost lake, and they were. We hunkered down for afternoon naps and enjoyed the amazing warm weather. This weather was nicer than most of our early September.

The wind did die down to 10 kph and it did not take long for the hungry birds to start flying again. Then we started to get small groups of birds hitting our decoy spread. We had groups circling the decoy spread and suck into shooting range. We spent a good 2 hours shooting birds, picking up dead birds and shooting more birds. We made the right decision staying for the evening shoot. It was fun watching the birds coast into the decoys. 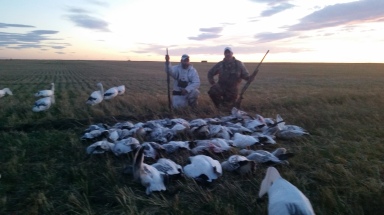 We shot 32 that evening and the were all Juvy snow geese. They circled well and some even made multiple passes after we shot at them. The Pacific migration of snow geese is not as large as the central migration but these west-coasters seem to co-operate well. This evening hunt gave me something to look forward to, the Spring Snow Goose Season!