The spring snow goose season was a little odd. Not to say that last year was normal, (and we really tore em up) it just seemed to be strung out. Not that there were not masses and high concentrations of birds in some areas, but from what we saw there were huntable numbers but not CLOUDS of them. I heard reports of people seeing them but they were short on picture proof. With all the chatter that I hear in the snow goose world, video/pics are the only 2nd or 3rd hand proof that I tend to regard.

We had a few hunts shooting smaller groups of birds in Lomond this season. I was hoping that we would soon lay into some birds in Hanna where we like to hunt. Tim who lives in the Hanna was looking for us and he told me that there were a few birds in the area. That was the news that I was looking for, Tim started scouting but he couldn’t really find any larger groups. I decided to call one of my favourite land owners in the areas who has a great field that has always produced for us. He gave me permission and then said,”You need to talk to my brother, there’s thousands sitting on his field.” My heart rate started to beat a little faster as I called his brother up and received permission.  I had a feeling that it was going to be a great morning.

We had a new friend out Michael D., who joined up with Lyle, Tim, Jeremy, and myself  met up at the field that we had a line on. My first impression when we went on the field was “Why would they go here?” The field was a grain field that the farmer wintered his cattle on all winter long. It was muddy, hoof marked up, and it looked picked over. But we could hear the yammer of the snows on all the sloughs that surrounded this field. We setup up fast and started to lightly stubble our blinds. The natural cammo of the layouts looked good on the muddy field and we only had to lightly stubble them up. I went to move the truck and Lyle informed me that a group of birds had landed in our spread while I was gone. This was going to be good.

There was no doubt that the birds wanted on this field. The groups started coming in 50’s and 25’s and it was non stop shooting. The field was littered with snows and I went out of the blind to survey the damage and realised we had about 40 birds down in the spread. I picked up 7 that were at my feet and then the rest of the party realized that we needed to do a pickup. Sometimes when the shooting is good we can forget how many we have down in the dirt. We ran out and picked up most and saw another mob coming at us low and ready to land. It was a great morning and at the end of the day we got 85 snow geese.

This was our best shoot of the spring season and we were very fortunate to be able to hunt the ‘hotspot’. Michael had a great time as did we all. There is not much better than a good old snow goose shoot on a field they want to feed on. This day, there was no circling the spread at high altitudes, they came in on the deck and we were able to put a few into the freezer.

I hope you were out this spring chasing those snow geese. I hope even more that you were able to shoot a bunch up. 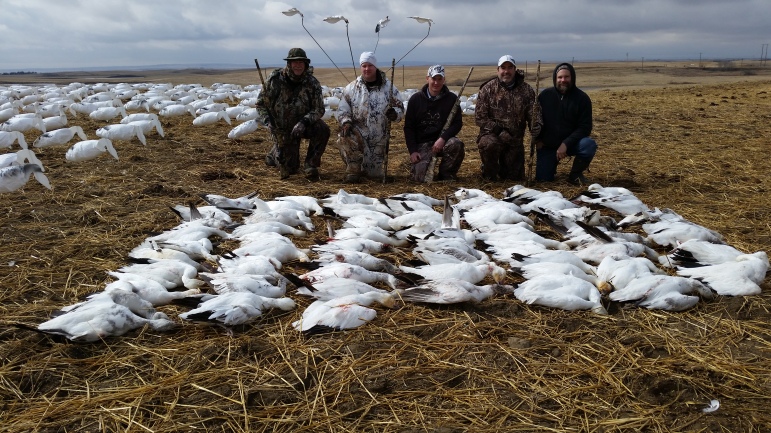