I wanted to spend some time with Quinn and at the same time show him some amazing sights that were ‘off the beaten path’. We decided that the ‘Quacker Smacker’ canoe needed it’s maiden voyage after the sea-trials. I had wanted to float the Red Deer River and had discussed a trip with Lyle S. for the summer. It was too bad that Lyle couldn’t make it for this trip but that allowed me some one on one with the boy. This was Quinn’s first canoe float and canoe camp out. He did AWESOME!

Sharon had suggested that we could get the Quacker Smacker into our enclosed cargo trailer and with some ingenious wiggling we got it in. I had been packing up my camping gear and trying to borrow some extras that we did not have (thanks to Matt Cruz for the T for Quinn). It was great trying to think about taking the minimal amount of gear but enough to make it a great experience for Quinn. W

We arrived at Dry Island Buffalo Jump Provincial Park as this was to be where we would put our canoes in. I was working a few weeks earlier and discussed with an ‘Old Dude’ I had met who was a building manager about my plans on a canoe float. He had worked at D.I.B.J.P.P. (acronyms are supposed to be short) for 10 years and told me that I would be crazy not to put in there since we would witness the transition from grassland/prairies to badlands. He was right. We were going to take out at Bleriot Ferry. As we drove down to the boat launch we were greeted with a sight that sent tingles down my spine. What a HUGE canyon and I pondered why I had never heard of this park before. We drove down the windy road to the boat launch and with the dog buzzing around swimming and tearing apart a beaver-lodge, we loaded the canoe. Off we went with the dog looking at us in the distance. 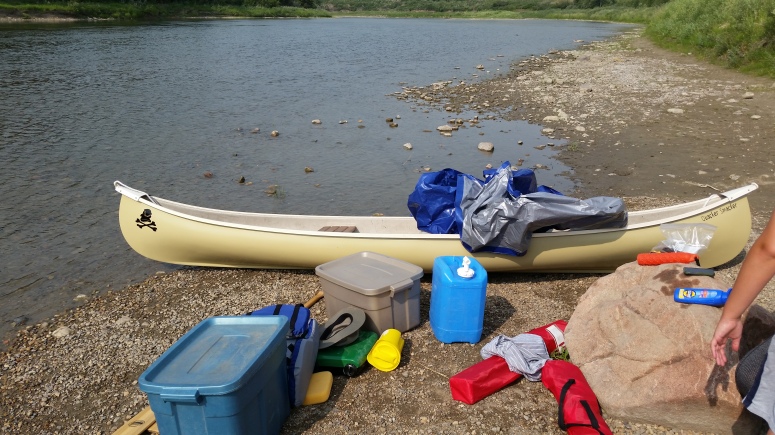 It was a hot day but the breeze was nice, it wasn’t a head-wind but blew from the west (our starboard side). We stopped for many swim breaks since I was very concerned about Quinn overheating. The river temperature was GORGEOUS, the water clarity was fairly clear. With the help of polarized lenses I watched a beaver swim upstream of our canoe about 2 Yards away. We saw: Mallards, Pintails, Reheads, Scaup, Loons, Herons, lots of Pelicans, Peregrines, Hawks and Eagles.We had a great river-side swim/lunch, Paddled for about 2 more hours and then made camp on the west side of the river near some shade trees. According to the GPS we floated 23 km.

Quinn helped beach and stow the canoe for the night, hang the life jackets, unload the canoe, and set up tent and the camp. He was more than eager to hit the water which for the next 2 hours, played in. A nasty looking and sounding storm blew in, bad enough for us to get ready for a heavy rain. The rain never materialized so I took to some fishing. I caught 2 G (limit 10) off the shore 20 meters downstream from our camp. I kept one and started making supper for us. Quinn and myself had ‘Cheezy, Beenies & Weinies’. Both of us spent a good deal of time in the river after supper. I started a SMALL campfire (since the forest fire hazard was very high) on the side of the river and roasted the G. It was very good and I learnt that if one was going to fish for supper 2-3 G would be great for 2 adults. We had 8 canoes/kayaks pass us in the evening as they were going to make camp just downstream of us. That was the only time that other paddlers passed us on the river. We both slept well, Quinn informed me that I snored and I informed him that he talked ALOT in his sleep.

We both arose from bed around 7:00am, to a light mist on the river. We sat in our chairs and took it in, I made some Peanut-Butter/Cocoa Cream of Wheat Cereal for us. We gobbled it down and finished it off with a fruit bar (or 2). We started to break down camp, pack the canoe, and were back on the river 9:02am.

We passed the other canoe campers that we had met the evening before and we noticed that a large group of cows had wandered into their camp. We greeted them cheerily and I made mention that I had never thought about bringing fresh beef on a canoe trip before. They asked where our destination was and we told them Bleriot Ferry. They replied that it was a lot longer of a float than they were going to do that day. I realized that they weren’t early risers, were old/lazy, and were probably a little hung over. We had a deadline and a destination and NO LOSERS WERE GOING TO HOLD US BACK!

The day was spent paddling, swimming and taking in the amazing sights. We had a lunch at Morin Bridge. I had driven that bridge many times and made mention to Lyle S. and others that it looked lovely there. I wanted to end our trip there and not push it farther but there wasn’t a good place to take the canoe out. We were committed to Bleriot Ferry as our take out. This was the first place that my phone got connection and I informed Sharon on our progress and ETA.

The river down from Morrin Bridge to Bleriot Ferry widened, slowed down and the surface reflected like a mirror. We  a Jet-Boat on a bech with a few dudes  showing off some fossils that they found in the hoodoos up in one of the many ravines. We stopped for a swim as there was no breeze and about 34 degrees. The Jet-Boat passed us about an hour later and we were able to nose our canoe into the 3 foot wake it left. If I hadn’t known to do that, there would have been a swamped canoe and a lot of 4 letter words screamed out. We powered to our destination past the ferry and to the campground just downstream. Sharon and an overly excited Piper were waiting for us there. They had waited about 45 minutes to an hour. My time judging was off a bit, thank goodness it wasn’t a race. My GPS said we went 28 km that day. We loaded up the canoe and gear into to the trailer and with a very tired but delighted Quinn, we went  back home.

The scenery and sights on this trip were breathtaking and the river was an easy paddle. We had some shallow spots and had to avoid some larger rocks the keel of the canoe took a good scraping from some of the shallower spots. No real damage done. You will scratch your canoe bottom on this run guaranteed! One only needs Novice paddling skills for this run. I am glad we covered as much ground as we did but I think that next run on the same stretch, I would shorten canoe time and focus a bit more on shore/camp time. I would do this run again in a heart beat. I am tempted to just take myself and the dog on this run. If any of you would like to do this float, comment below!